The Many Uses of Hemp

Hemp is one of the oldest domesticated crops known to humanity. According to John A. Garraty, who wrote Columbia History of the World, the oldest relic of human industry is a hemp fabric scrap that dates back to 8,000 B.C. Due to its versatility and use in many applications, the history of hemp is extensive, dating back thousands of years. Some of the use of hemp includes making clothes, food, boat sails, canvas, paper, twine, medicinal purposes, ship rigs, fishnets, and more. Today, we will be diving into a brief history of hemp and the many uses of the crop. One of the more modern ways we are able to enjoy hemp is through products like hemp muscle rub, hemp beauty products, even hemp dog treats. All of these products, and so much more, can be found online at Oregon Hemp House. Shop now, or give us a call for more information.

There are numerous cannabis plant varieties. Hemp, also known as industrial hemp, is the non-intoxicating variety of Cannabis sativa, which contains less than 0.3% of THC. although both marijuana and hemp come from the same species, they are very different, both having distinguished chemical makeup, cultivation methods, and utilization. 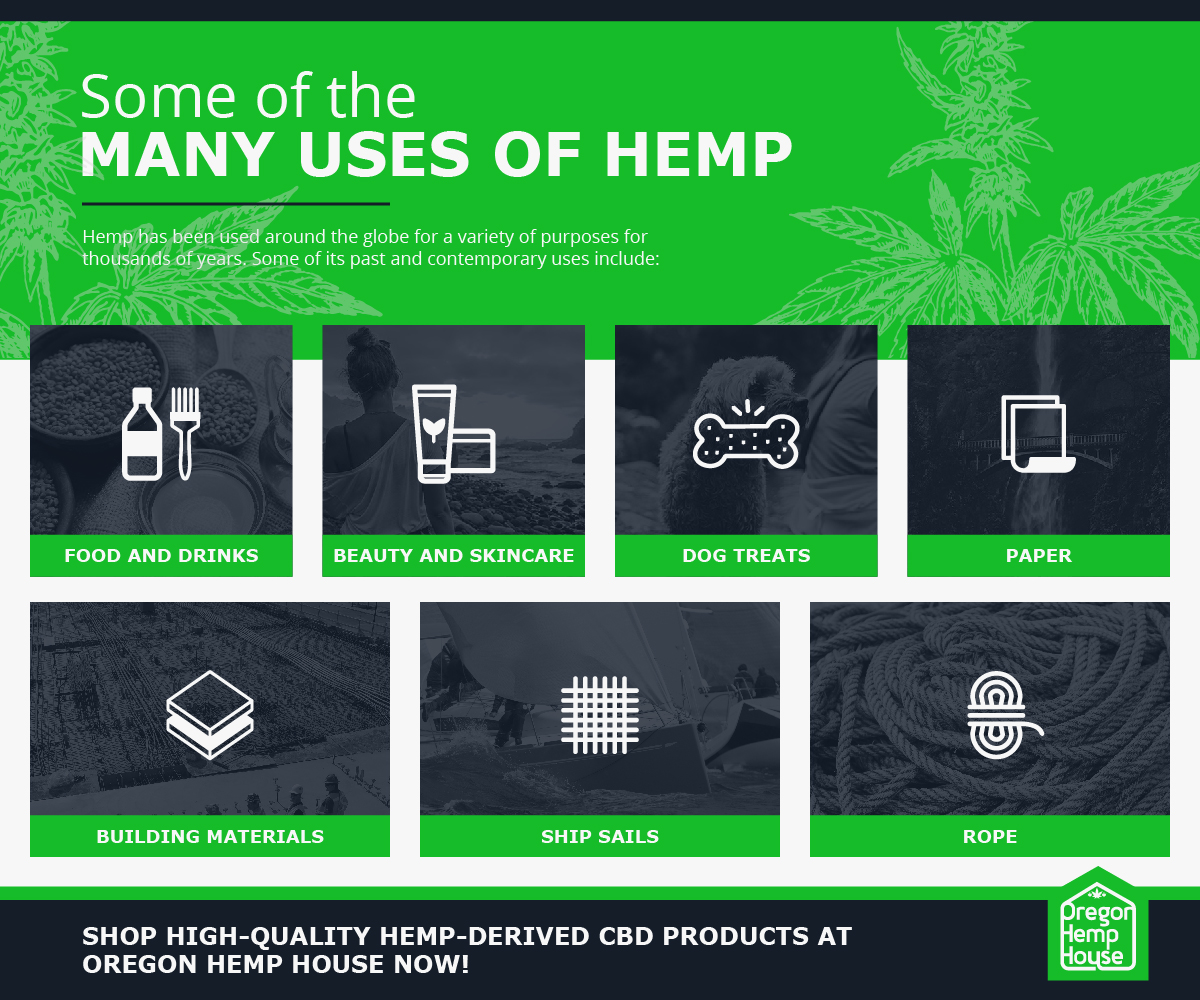 A Brief Look Into the History of Hemp

Hemp production was a staple in early American agriculture, from the early 1600s to the late 1800s, when the plant was used in the manufacture of a variety of materials, including rope, clothing, and sails for ships. In fact, hemp was considered so valuable and necessary that it was used as legal tender (a currency that was accepted if offered in payment) in multiple states, like Maryland, Virginia, and Pennsylvania. In 1619, the Assembly of Virginia passed legislation requiring every farmer to grow hemp.

Hemp was used in everything from 19th-century clipper ship sails to the covers of pioneer wagons. The Declaration of Independence was drafted on hemp paper, and even the finest Bible paper today remains hemp-based. It wasn’t until after the Civil War, when cotton and other imported materials gained prominence, that hemp lost its status as the country’s go-to agricultural commodity.

Outside of the U.S., the history of hemp stretches back much further than the 1600s. Hemp was used as a textile fiber as far back as 8000 B.C. in ancient Mesopotamia. China has also been continuously cultivating hemp for more than 6000 years and was also the first to discover hemp’s potential for making paper and produce the world’s first paper material sometime in the second century B.C.

In Europe during the Middle Ages, hemp was an important commodity, as it was used to create clothing and ropes for ships because of its durability in saltwater. Hemp was considered valuable that in 1535, King Henry VIII decreed that all landowners in the United Kingdom must sow at least one-quarter of an acre with hemp of face a steep fine.

Hemp Use in Modern Society

Henry Ford built a prototype car from biocomposite materials, using agricultural fibers such as hemp, but after that, the appreciation and use of the crop started to go downhill. In 1937, the passage of the “Marihuana Tax Act” occurred, and, despite the U.S. government’s “Hemp for Victory” campaign during world war II, misplaced fears that industrial hemp is the same as marijuana combined fears with targeted harassment by law enforcement discouraged farmers from growing hemp. The last crop was grown in Wisconsin in 1958, and by 1970 the Controlled Substances Act (CSA) formally prohibited cultivation.

Today,  the use of industrial hemp has evolved into an even greater variety of products, including health foods, organic body care, clothing, construction materials, biofuels, plastic composites, and so much more. Sustainable hemp seed, fiber, and oil are still used in raw materials by major companies, including Ford Motors, Patagonia, and The Body Shop, to make a wide variety of products.

Hemp has a much lower environmental impact than other building materials and is actually carbon-negative, absorbing carbon while it grows and once it’s in place in a building. It is a natural substitute for cotton and wood fiber, and can also be pulped using fewer chemicals than wood because of its low lignin content.

One of hemp’s most notable uses, particularly in the United States, is the booming CBD industry. CBD products have been a staple at dispensaries for years, but once hemp was legalized, hemp-derived CBD officially went mainstream and began to show up in everything from tinctures to personal care products.

While hemp and hemp-derived CBD are legal on the federal level, most states have strict regulations on how it can be manufactured, marketed, packaged, and sold. Restrictions are particularly strict when it comes to consumption, most notable in the food, beverage, and nutritional supplement categories.

It’s clear, though, the hemp is here to stay. The global market for hemp consists of more than 25,000 products in nine submarkets: agriculture, textiles, recycling, automotive, furniture, food and beverages, paper, construction materials, and personal care. You can find hemp and hemp-derived CBD products nearly everywhere, but since it is an unregulated market, it’s hard to find products that are made with high-quality hemp.

You can find high-quality hemp-derived CBD products online at Oregon Hemp House. Our wide selection of hemp products extends into personal care, beauty, dog care, tinctures, and more. Take a look at our online collection or come visit our location in Portland.